With nearly enough projects to fill a CD changer, Atlanta-based ELHAE has his sights set on Boston and beyond as he brings his unique R&B sound on his first headlining tour.

Born Jamaal Jones, ELHAE (el-ay) — an acronym meaning Every Life Has An Ending — has been creating music since his days in high school. The name came to fruition he said, in high school while he was writing lyrics and also embracing his admiration of Pharrell and N*E*R*D (No One Ever Really Dies).

“[I’m] a huge fan of Pharrell and what he did with N*E*R*D,” ELHAE said. “I always thought that [the acronym] was super super cool. I guess my thought process at that age was probably like what would the inverse of that be and just try to play off [of] that… It was something that I thought was super cool to kind of live by. Just living every day almost like it’s your last. Just try to do the best that you can do with what you have and not worry about the next day. Worry about what you can do today.”

ELHAE’s innate ability to sculpt and adapt his music to different genres with ease is what has helped keep his music in permanent rotation. As a teenager, he was a part of his high school choir and also his church’s choir. From performing songs like “Ease on Down the Road” in high school to performing songs from the likes of Fred Hammond, ELHAE credited the two choirs for opening his musical palette.

When I was around 12, I wrote my first song after seeing the “Frontin’” video on TV.

With the choir experience behind him and the likes of Lupe Fiasco, Kanye West, Childish Gambino and more as musical influences during specific moments in his life, ELHAE’s road map was set. He credits Kanye’s 808s and Heartbreak as being the start to a shift in his sound. One where, he said, he “felt more comfortable to sing and be vulnerable and transparent in my music and [the 808s and Heartbreak] era of Kanye is a huge inspiration for me.”

“I don’t ever try to dumb down my thought process when it comes to creating music,” he said. “So I always try to listen and be inspired by people that do the same.”

ELHAE’s discography stretches back several years starting with his releases Aura and AURA II. He followed the released with All Have Fallen in 2016 and now the release of Trouble in Paradise this past February.

How you get your message across is just about you getting the message across. There’s a connection. If it connects, that’s all you can really ask for. That comes in many shapes sizes and forms. It doesn’t have to be so deep all the time. It could be anything. You could just be partying and having fun but as long as you’re connecting with real human emotion, I think you’re in the game.

Trouble in Paradise is a 12-track conceptual album that a number of fan-created have tried to decipher its background story. As he does with many of his other albums, ELHAE said he always tries to incorporate his experiences into his music which helps him be genuine “instead of trying to fabricate or make something out of thin air.” The concept behind Trouble in Paradise is open to interpretation, but ELHAE said the project flows with the idea that he likes being on the road.

He said when he’s not in a good mood, he drives to relax and rid himself of “dark emotions.”

“[Driving] was the first thing with Trouble in Paradise where I was like ‘I could use that … to kind of like start this thing off and kind of like flow throughout the project,” he said. “It started [with] being on the road and just kind of like getting these calls from different people asking  ‘Are you ok?’… you got your ex-girl calling like ‘I miss us.’

“All [these different things] are happening during this drive … [and] that’s kind of where I wanted to go with it. Then the ending, I kind of left with a cliff hanger and just tried to like have people wonder what just happened … The concept was just basically … little nuggets of my life.”

After listening to Trouble In Paradise by @ELHAE for 1000 times, I’m just now realizing that he was talking to a girl that had a nigga and they was catching feelings for each other. She just kept playin games and Elhae’s friends were trying to get him to go out and turn up and

Trouble in Paradise boasts features from Wale, O.T. Genasis, Big K.R.I.T. and Sevyn Streeter while ELHAE enlisted the likes of Rico Love, Floyd Hills, Silas and more. From tropical to alternative R&B, it’s evident the beat selection on the album was hand-picked and gelled perfectly with his lyrics. The theme and title, he said, were already formulated before he recorded the lead single in Miami with Rico Love.

The videos for the tracks “Hennessy” and “Cuba” were recorded in Cuba with Nem Perez, his production team Tuff Contender, cinematographer Gus Bendenelli, Cuba Films and ELHAE’s team. Perez said he talked to ELHAE a couple of months before they shot the videos.

“I mentioned that I’ve always wanted to shoot something in Havana since that’s where my family is from and I’ve always loved the idea,” Perez said in an email. “He really dug the idea and fought for it to come to fruition.”

Perez also mentioned that the process in creating the video wasn’t exactly easy.

“So many people fought for this music video to happen,” he wrote. “Logistically speaking it’s not easy to shoot in a communist country with no resources. There were many times the plug could’ve easily been pulled. It was a team effort … the production team in Havana worked hard during the entire stay and I couldn’t be more (sic) happier with the final product.”

I feel like when you incorporate real emotion in music and try to relay that to [your] audience, it comes across genuine and they feel what you feel.

ELHAE, along with I.M. of the K-Pop group MONSTA X, released “Horizon.” The song was years in the making and has been released to the surprise of many fans who thought it might not happen.

With Aura, AURA II, All Have Fallen and his latest release Trouble in Paradise in tow, ELHAE brings a fruitful soundtrack with him on tour.

Sporting a live band, ELHAE kicked off his “Trouble in Paradise Tour” this past Sunday in Atlanta. How special was it to kick off at his hometown? “Super special,” he said. The opening night show sold out a month before its scheduled date, answering his question where he wondered if “my hometown really eff[s] with me.” The show was packed with family, friends and fans.

Next up is Boston tomorrow night. With support from NBDY and Hasaan Barclay, ELHAE hits Sonia in Cambridge. It’s not too late to grab tickets for the show: $18 tonight and $20 tomorrow. Check back Thursday for our show review. 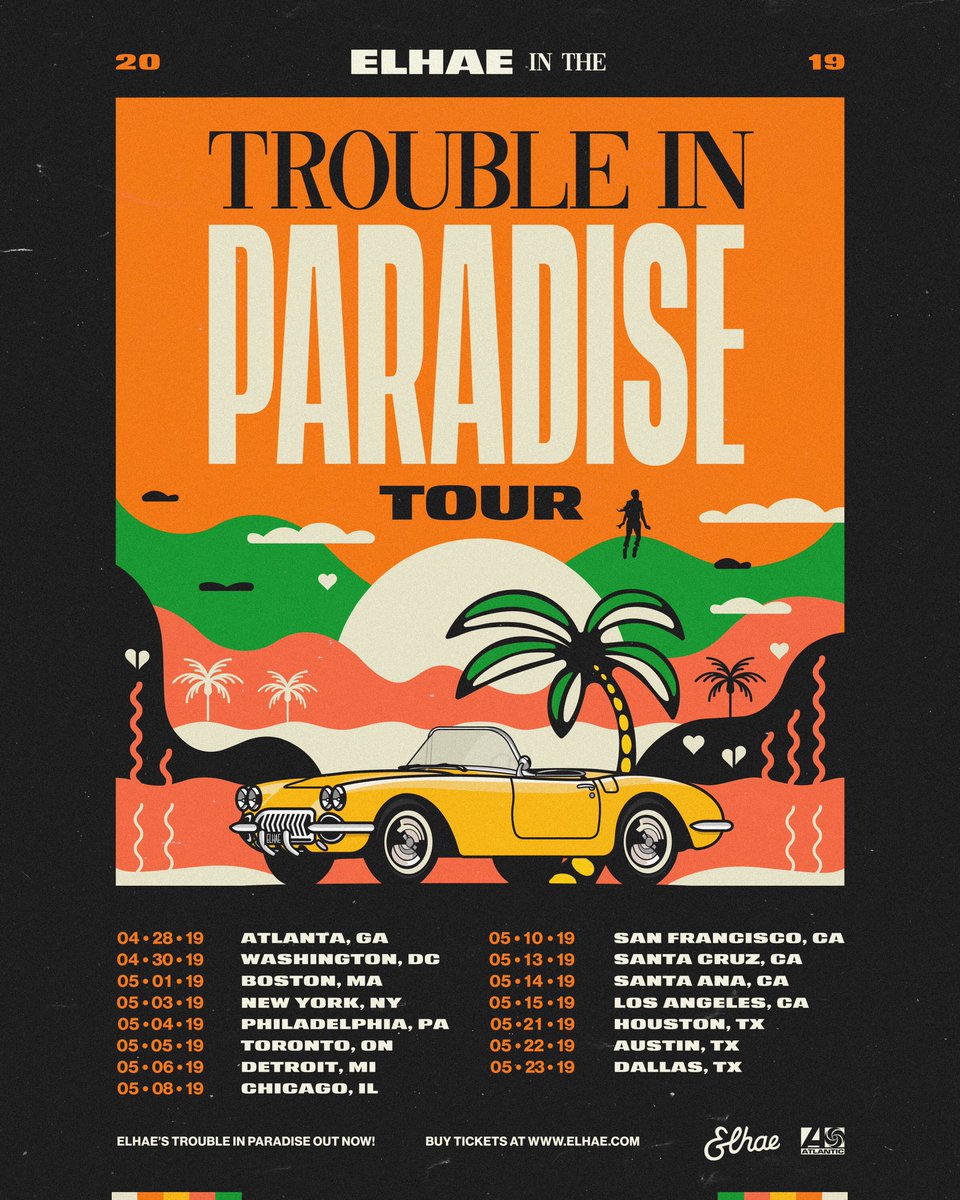