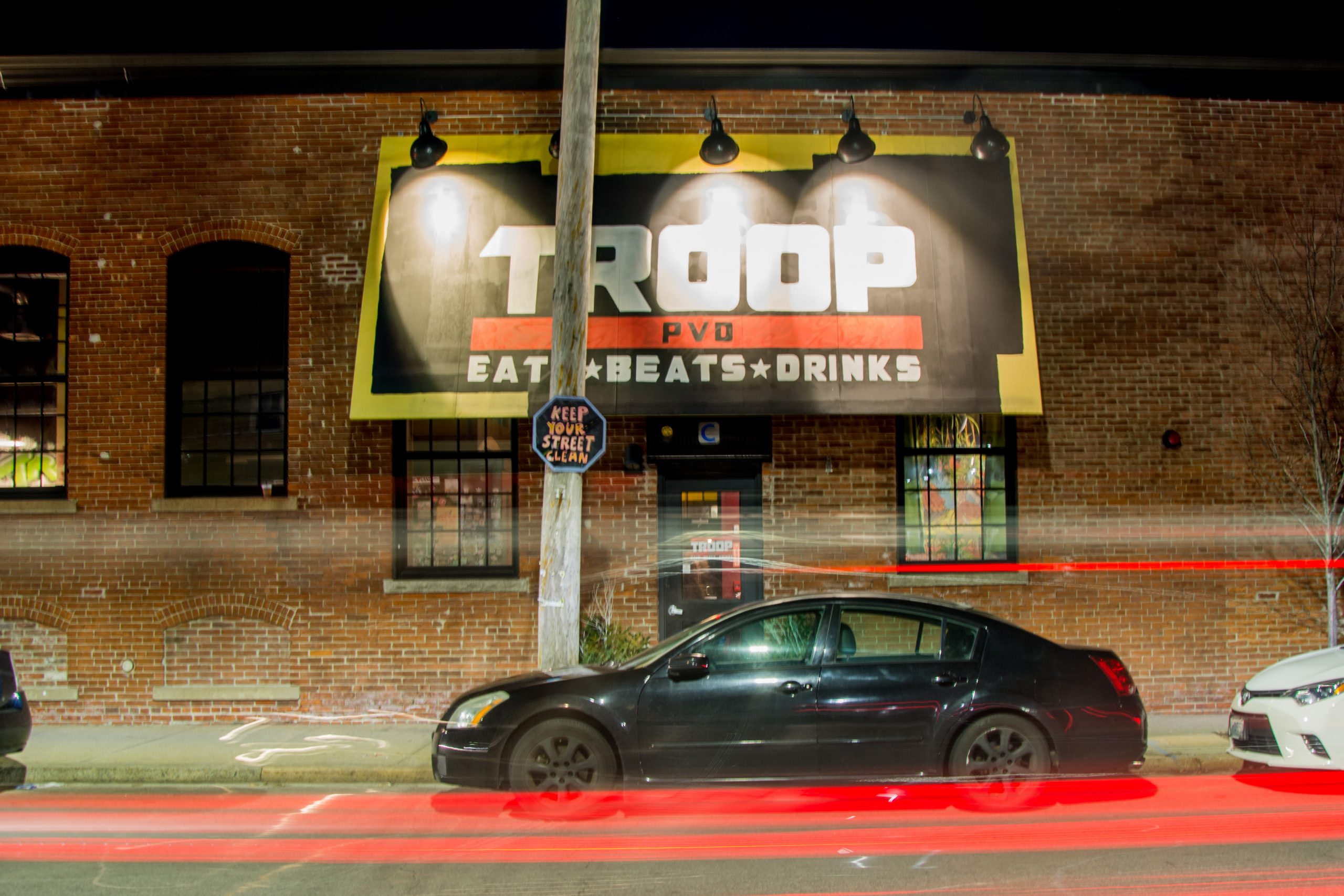 The Olneyville-based restaurant has only been open a couple of months and has become a hot spot due to their food and atmosphere.

Restaurants come dime a dozen, but when one fuses hip hop with a dining experience like Troop has, it’s hard not to take the time out to stop by.

The difficulty of managing a restaurant is a feat not many are quick to suit up and handle. To do it alone isn’t

easy; bring in five people like Troop has, and you would think it would be chaos. However, even from the outside looking in, the five-member team — four public faces and one silent partner — make it look smooth.

The four faces of Troop include — from left to right order in the videos to follow— Christopher Simonelli, Jason “JT” Timothy, Sean Larkin and Leigh Vincola. The camaraderie and comfortability they exuded with

one another from simply sitting together and conversing, truly encapsulates what the quartet has put together in Troop. After speaking to them, their vision for the restaurant was ubiquitous. There wasn’t a single corner missing a detail.

It Was A Good Day

Jason, Sean and Leigh are all founding members of the catering company Laughing Gorilla, which serves as the crux of Troop’s birth, specializing in global street food and craft beer.

“Laughing Gorilla came together [as a] collaboration between myself, Sean and Leigh,” Jason said. “It was something where I wanted to work with Sean in a capacity [because] of the respect that I have for him and what he does and how he’s driven his brand…I wanted to work with someone who had that drive, that passion.”

Sean, who is also the founder and brewmaster of Revival Brewing, wanted to sell his beers at public events and because of that, a spark ignited to begin the process of planning their own restaurant. The name of the restaurant, Leigh said, comes from the name given to a group of gorillas when they come together — a name that is consistent with both brands, with Chris joining after.

The restaurant began with a soft opening in October 2017 that was made up of select food menu items. In November, they received their full bar license and were ready to open. 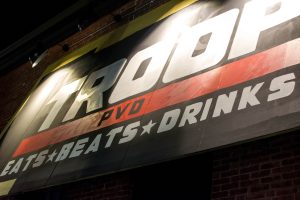 While much of the surrounding buildings in the area resemble the same old warehouse look from the outside, Troop is impossible to miss while walking or driving on Valley Street. With its name displayed prominently in bold white letters above its front door, the restaurant nests at The Plant — a multi-building community that was converted from an old abandoned factory and into artist live/work lofts, galleries and restaurants. With the closing of Bocado, the restaurant previously in the space Troop now occupies, a need for a replacement was in order.

Sean, who is from Olneyville, found the space after hearing about it by his good friend at Ello Pretty, a beauty loft behind the restaurant.

Sabina Matos, Ward 15 councilwoman—who represents the Olneyville, Silver Lake, Valley and West End neighborhoods of Providence—believes the restaurant is a great addition to the neighborhood.

“[The restaurant has] good food at good price and great atmosphere,” Matos said. “I am glad to see that location back to in action since the space was empty for several months.”

Rafael Blanco, who had was ready to leave after a meal while we were at the restaurant, called the restaurant “dope.” Blanco said he stopped by the restaurant that day introduce it to his mother, who he said loved it. He told her that he knew of a restaurant that wasn’t modeled like other ones they’ve been to and that she would take a liking to it.

From the food to the ambiance, to the interior decor and even the restroom design Blanco was a fan. Troop’s restroom design is made to embody one of the widely-known components of the hip-hop culture — graffiti. Blanco, who had previously come to the restaurant, showed a video of the first time he saw the inside of the restroom, noting that there had been a significant number of additions to the graffiti on the walls. 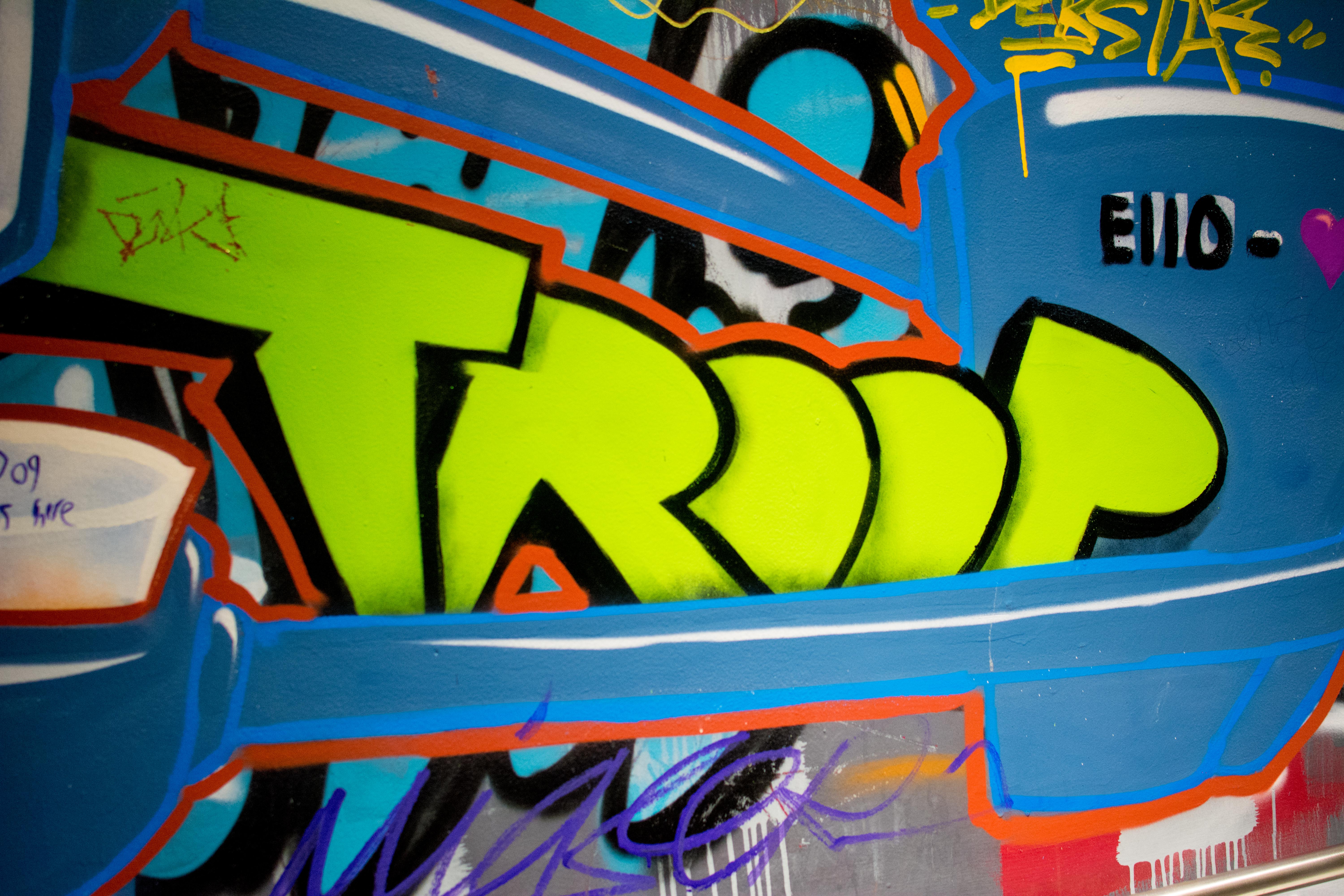 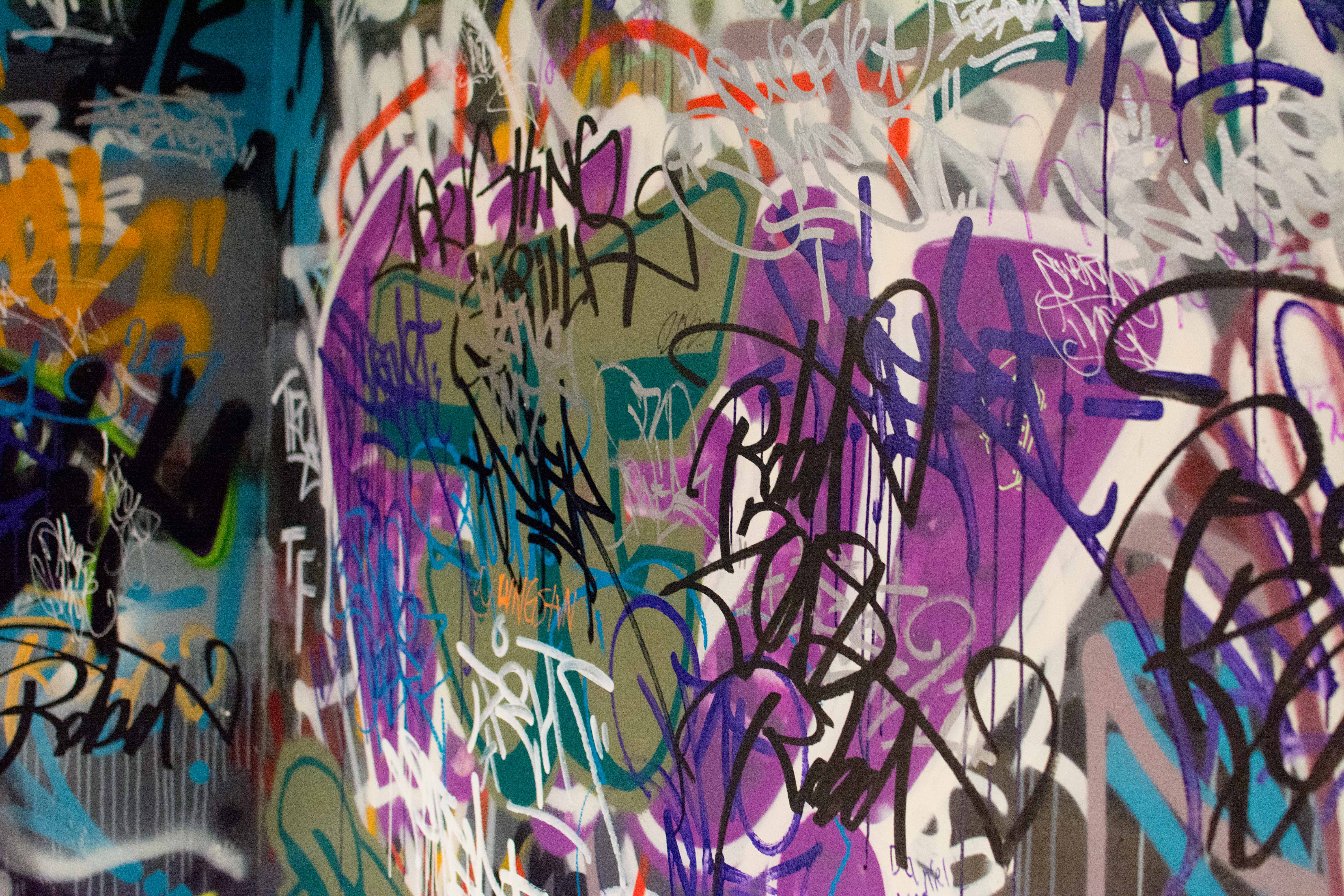 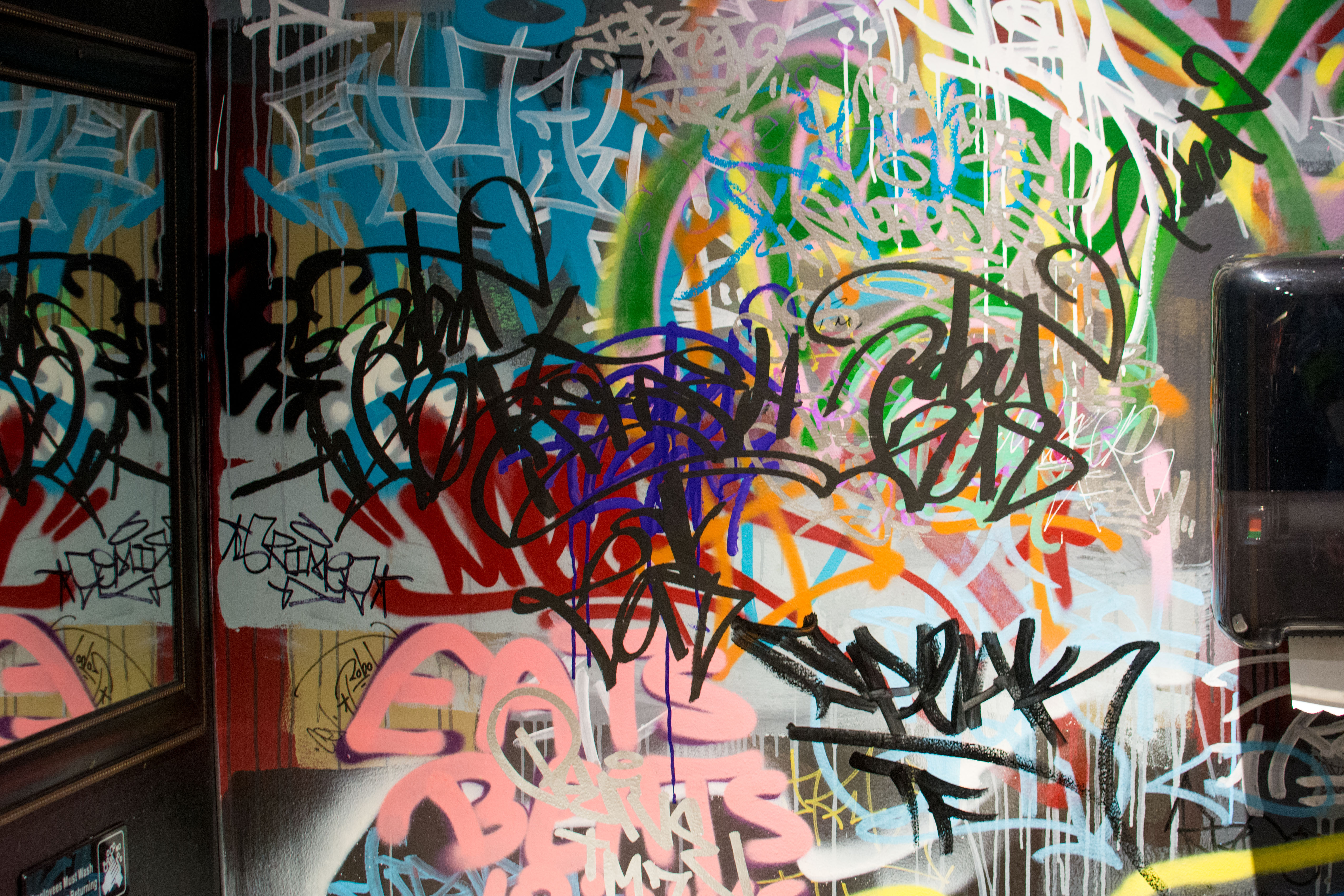 Troop’s unique style and design came from renown designer Kyla Coburn, who is based in Warwick, R.I. The restaurant includes murals, boomboxes, skateboards and surfboards. Shoes hang from their laces on i-beams above the bar, in the same manner shoes hang from telephone wires in neighborhoods. They all have ties to skateboarding in one way or another, but Chris, in particular, had the greatest bond with the skateboards in the restaurant. Both he and his father spent countless hours preparing the skateboards for their ultimate fate as chair backs. 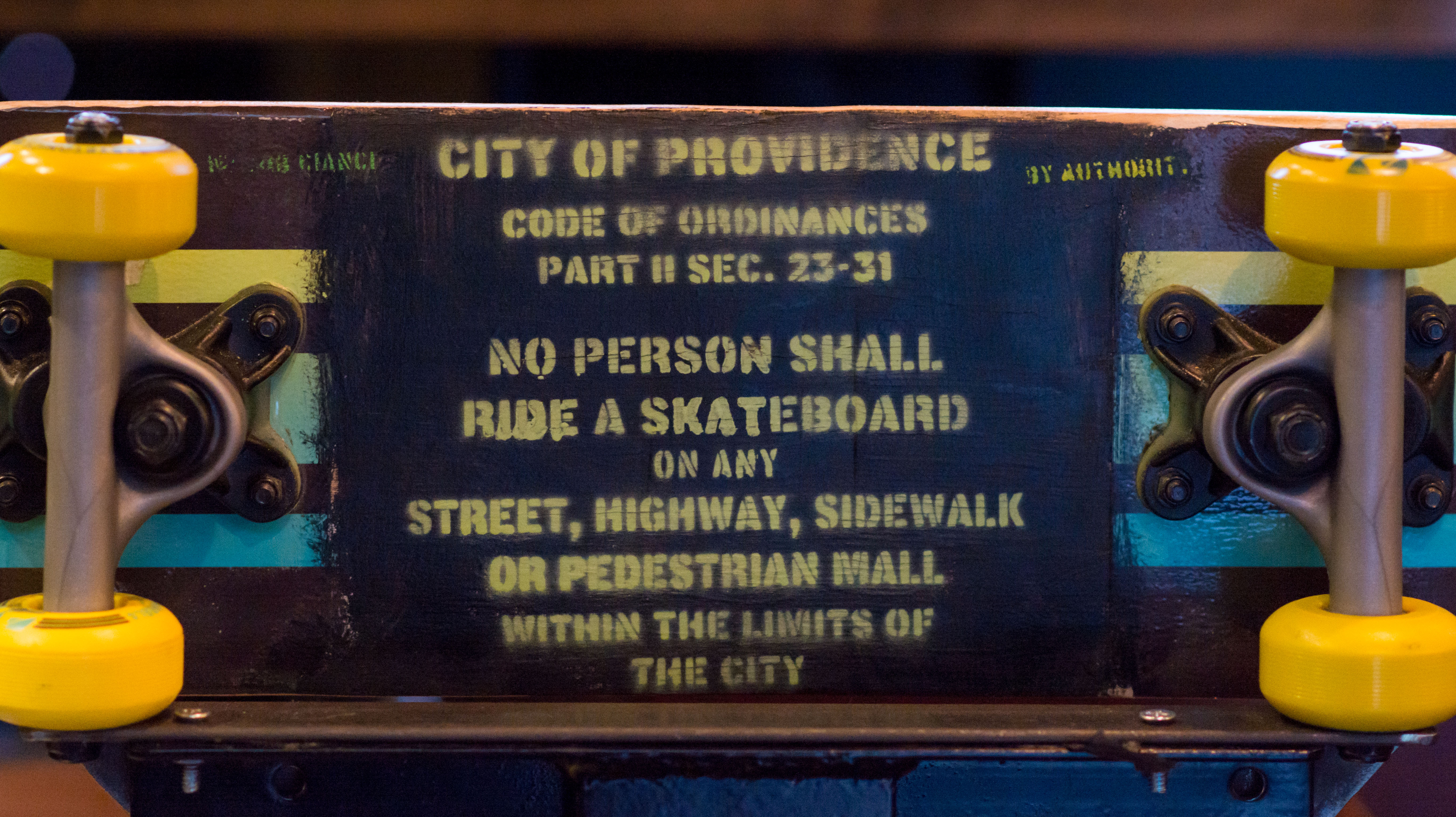 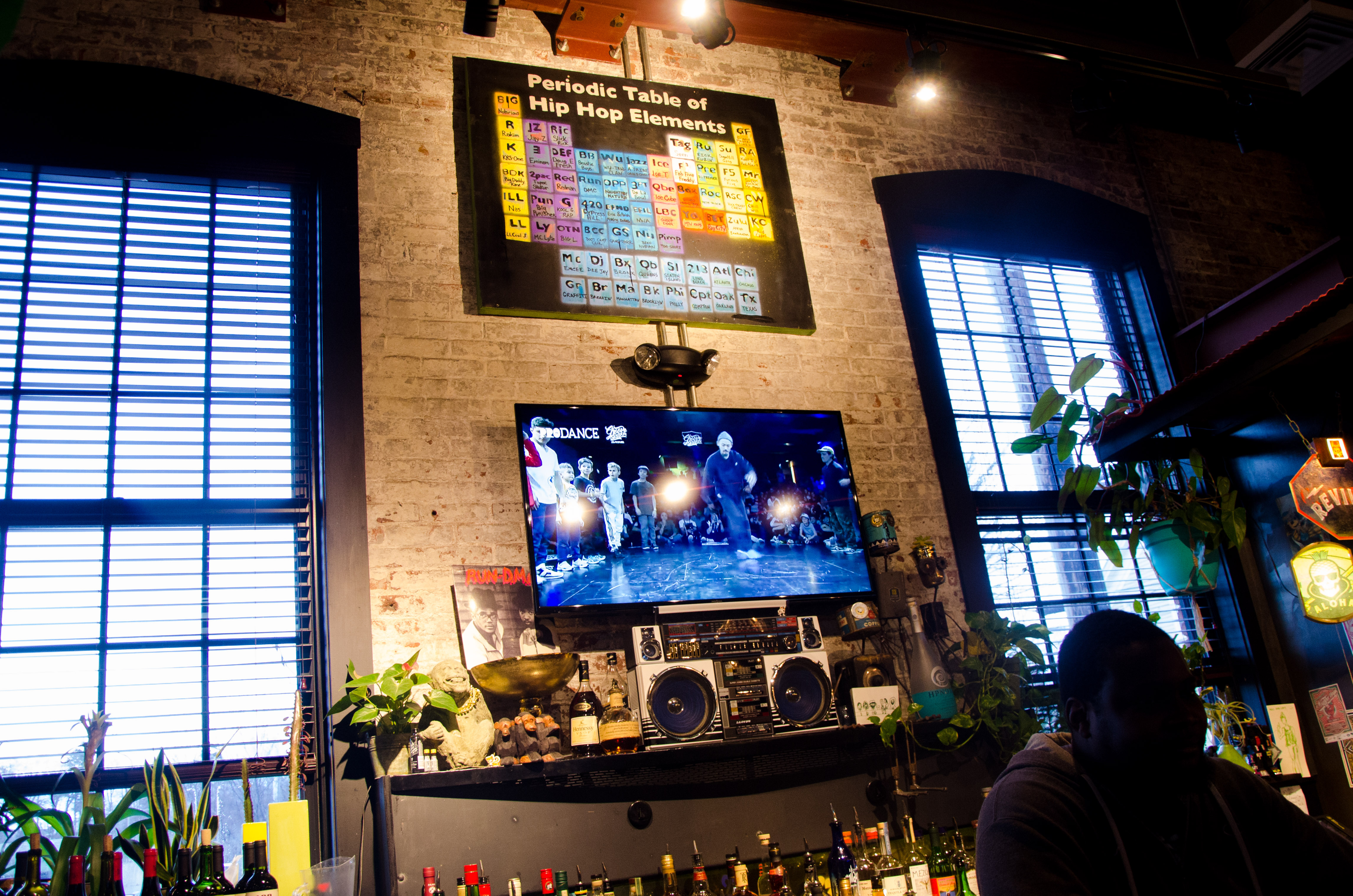 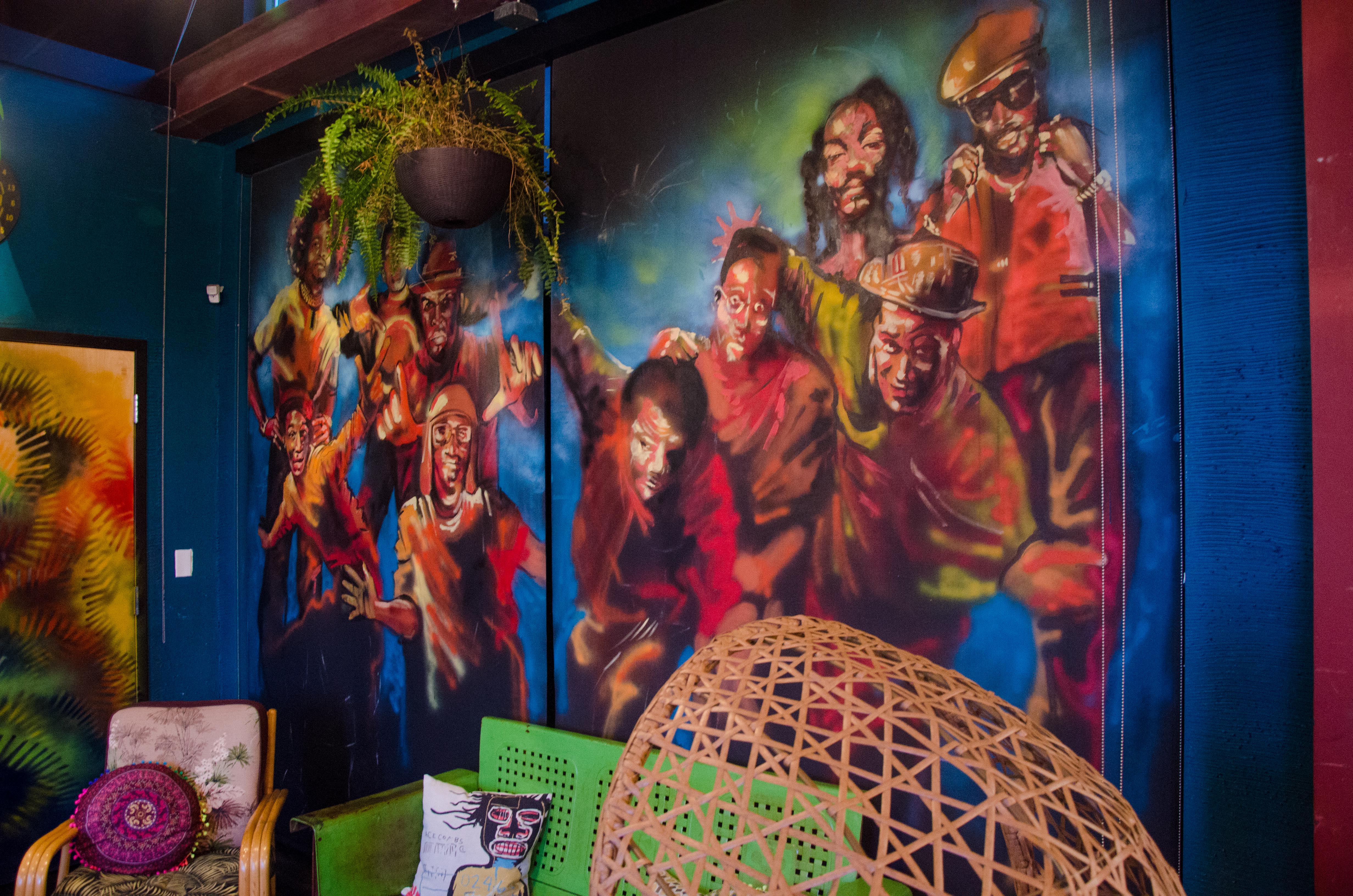 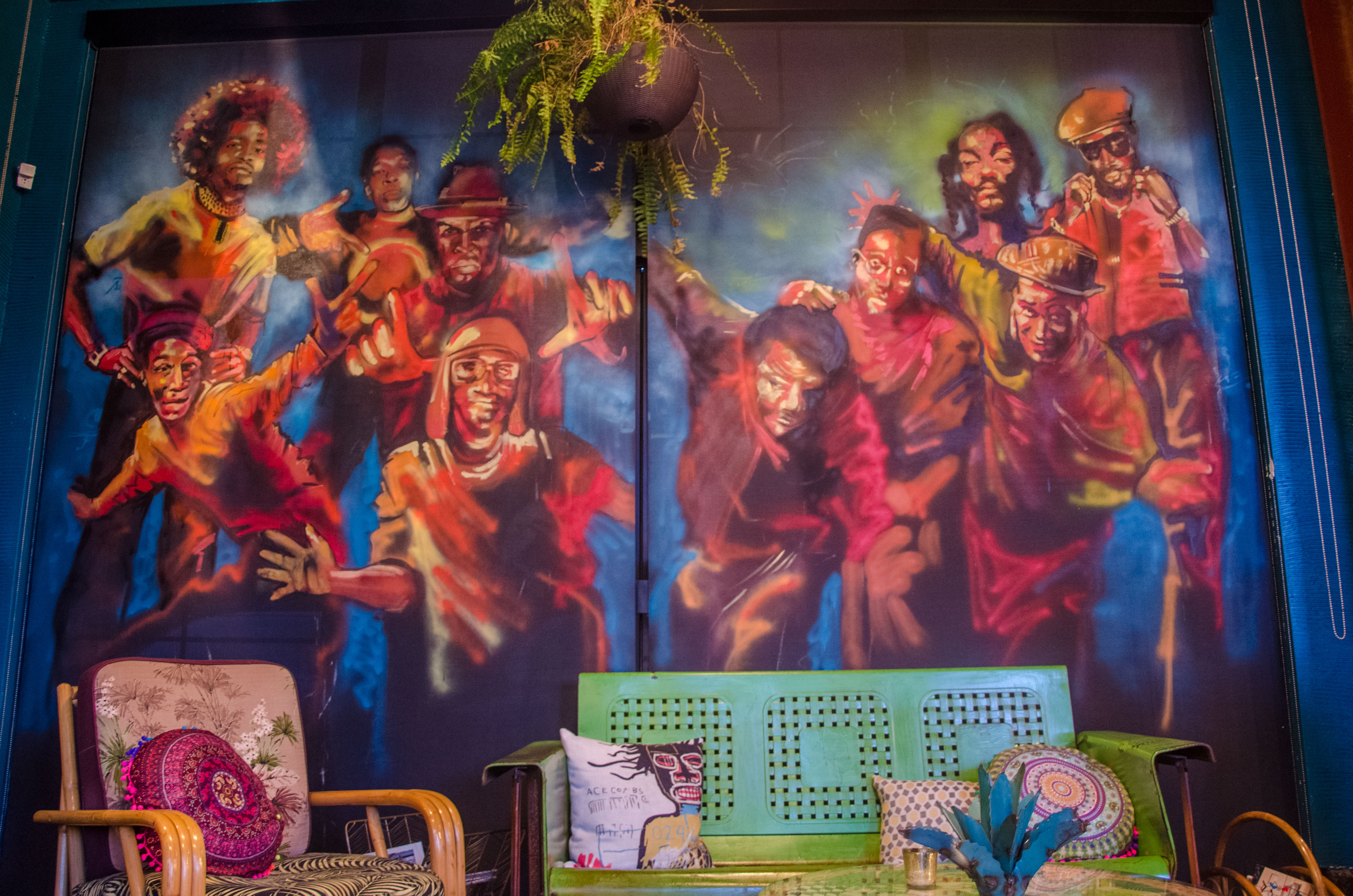 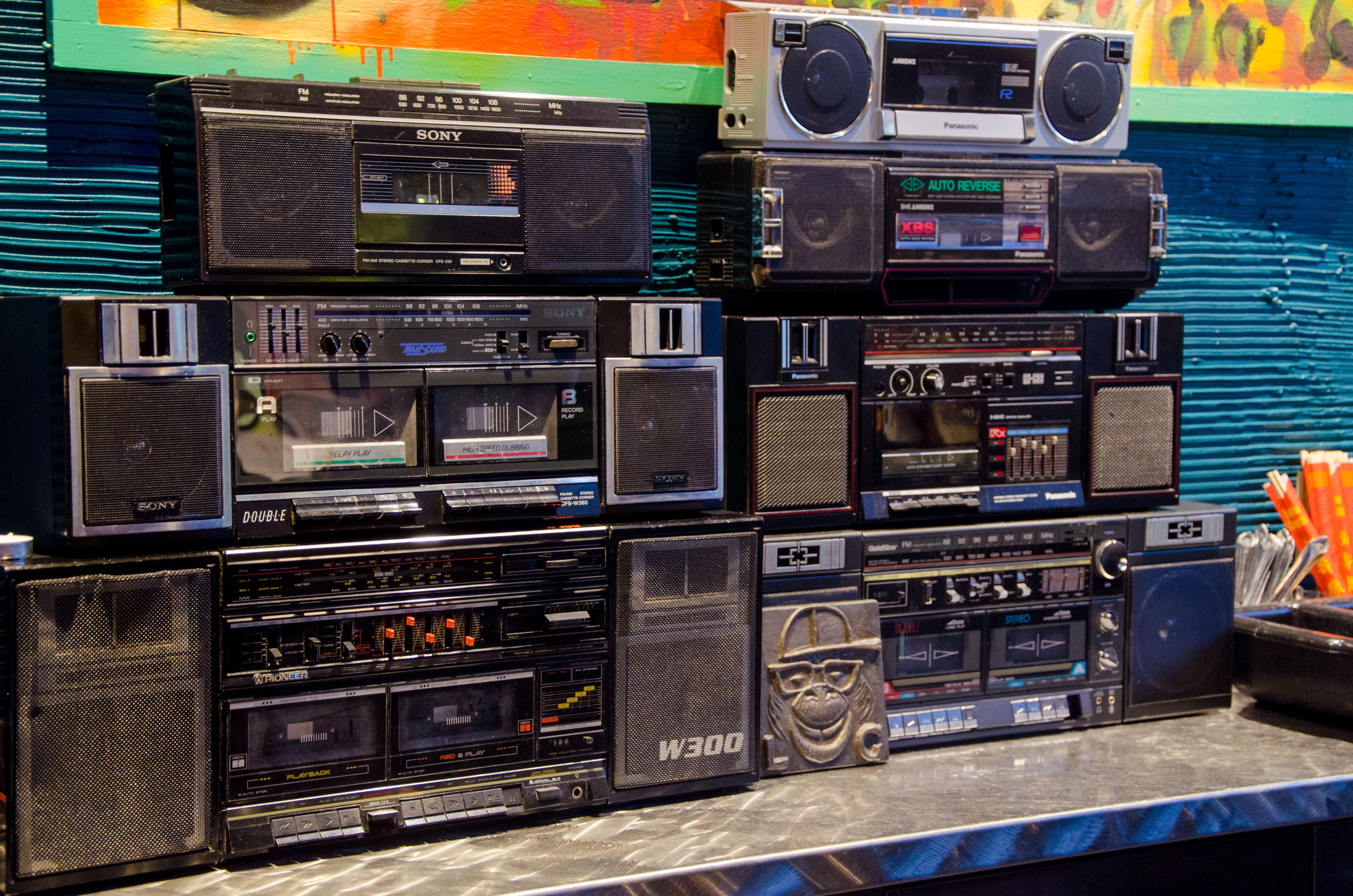 Off The Books [Menu]

You can skip this section’s reading and listen to JT talk about the restaurant.

A restaurant’s style and atmosphere can only count for so much when considering where to take your patronage. The dining experience is what can make or break it.

A couple of dishes offered at TroopJason’s menu won’t always look the same. He took from Laughing Gorilla’s global street food concept but said Troop has refined that model and has stepped a little away from it. He mentioned it almost comes down to how he’s feeling about the menu up to that point. Sean aids the dining experience with his Revival beers. 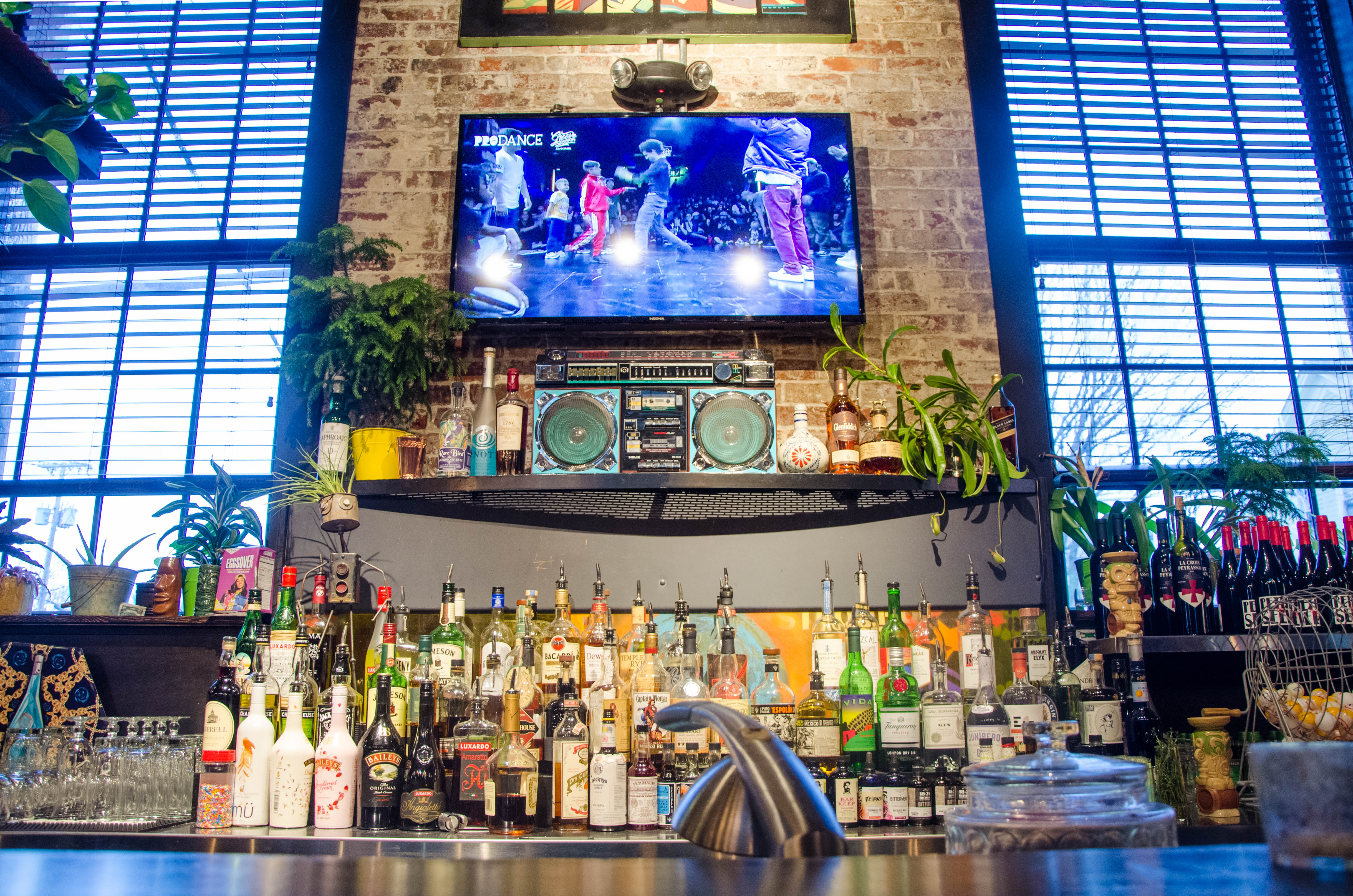 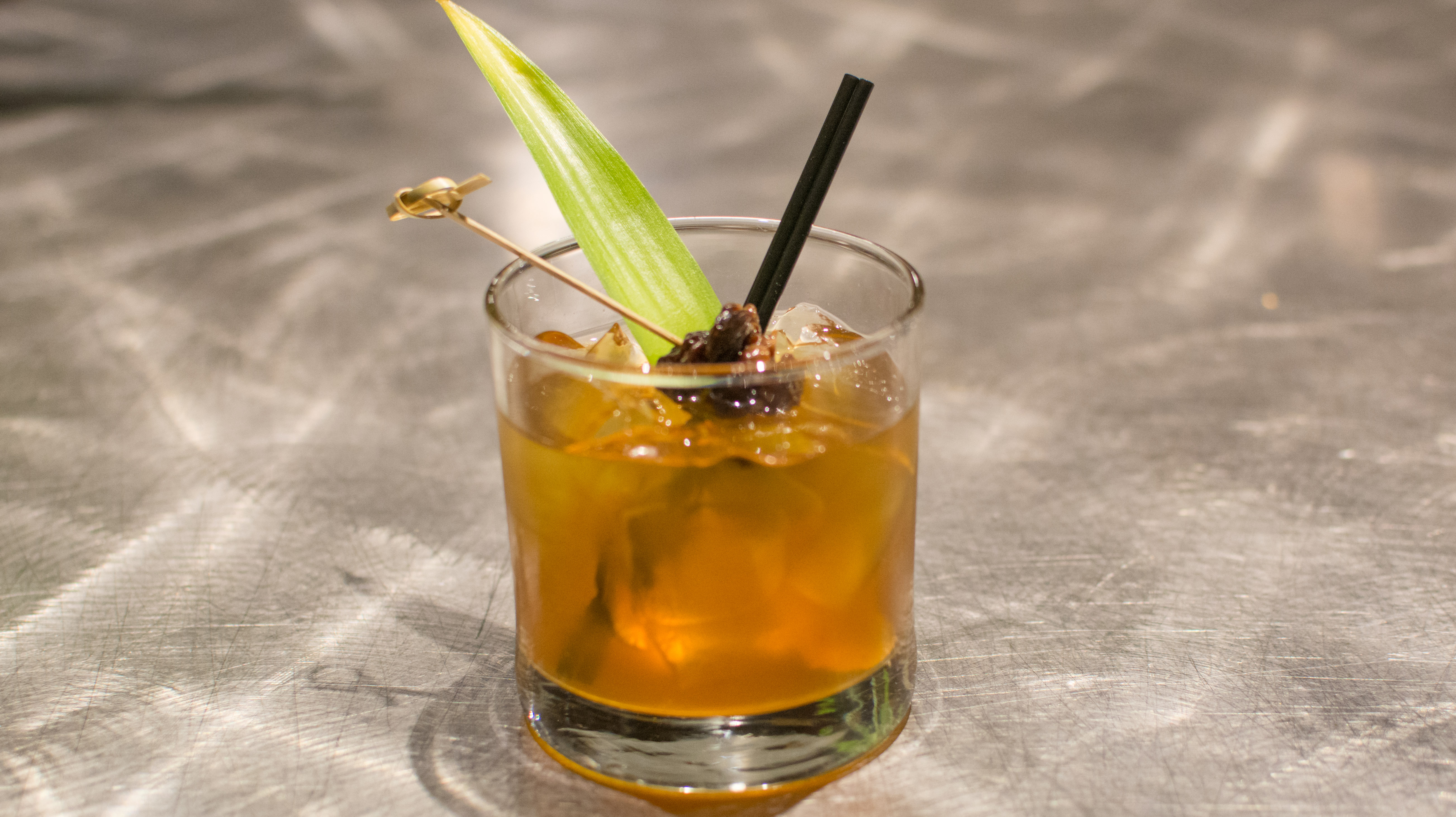 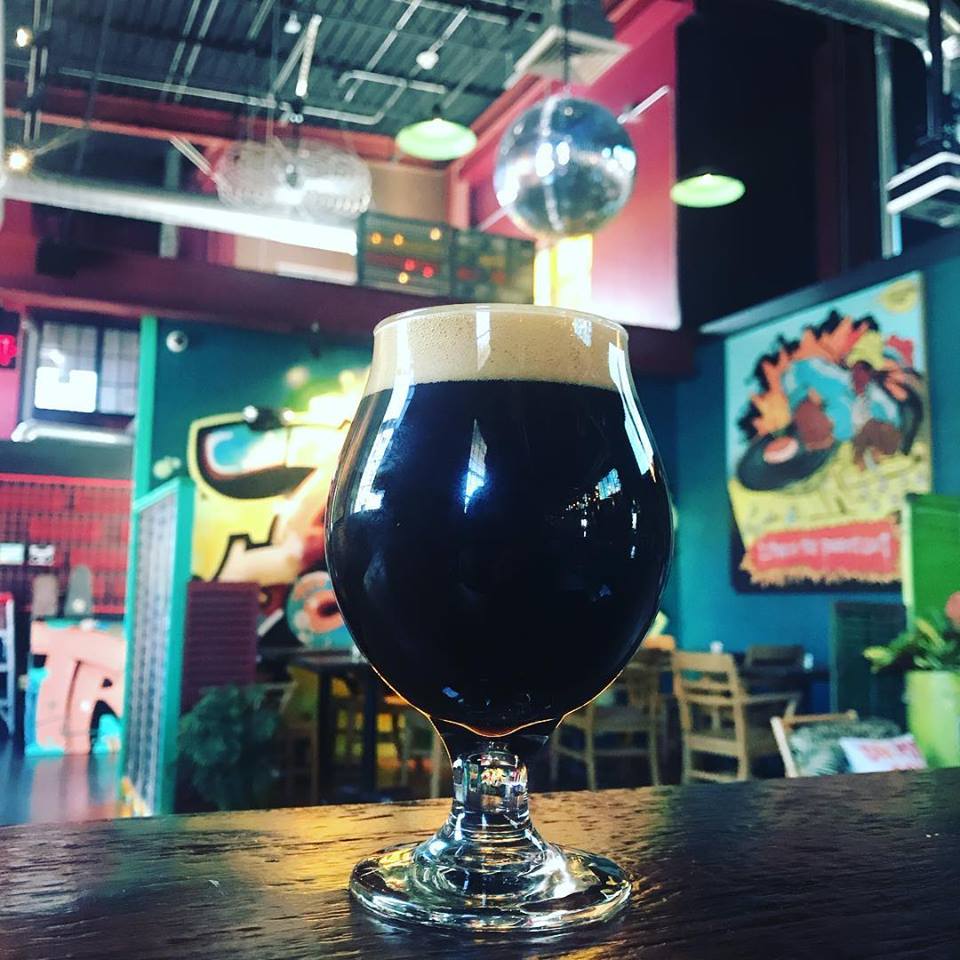 What makes the relationship between the four special is what each of them brings to the table (pun not intended). The experience includes, but isn’t limited to: Jason bringing the menu ideas and food, Sean bringing the Revival beers, Chris overseeing and taking care of day-to-day duties including messaging because of its importance and Leigh, who connects her day job with the restaurant.

“I get to do a lot of work in my day job with farmers and food producers in the region,” Leigh said. “There’s a lot of [intersection] for me with this space and the other work that I do and we’ve been connecting the two. That’s really valuable to me.”

The team debuted brunch the day after we spoke to them and they were very excited. Another colleague, Andrea, said she couldn’t wait for brunch and was equally as excited as the rest of the team.

Jason said change is good and he doesn’t want to be “pigeonholed to any one concept [or] idea.” Sean had fun with what that.

“We definitely attracted a demographic that also enjoys the things that we did when we were younger,” Jason said. “They grew up in that same time period so to them I think it’s a beacon of hope, if you will, compared to a lot of things that are out.”

Troop is breaking the norm when it comes to the standard restaurant approach all while capturing a unique experience. From food to music to decor to ambiance, the partners all have a hand and a say in the restaurant’s day-to-day business. So far they’ve added brunch to the menu. What will come next? 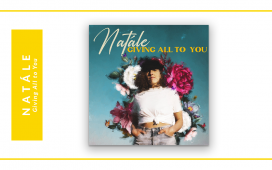 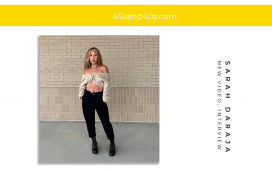 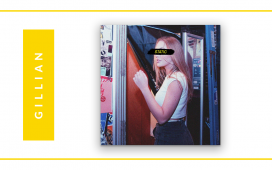 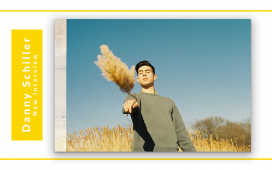 Danny Schiller fuses Spanish and American cultures in his music 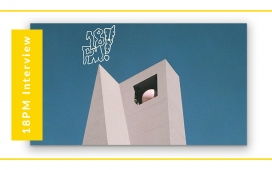 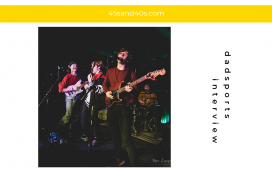 NOW SPINNING: Santana Travels Back to the ’70s with New Album