Balance and Composure Readies for Upcoming US Spring Tour

We spoke to Balance and Composure drummer Bailey Van Ellis ahead of their upcoming tour.

Hot off of their Australian tour, Balance and Composure are ready to hit the road along with openers From Indian Lakes and Queen of Jeans.

With their third studio album, Light We Made, having been released last October, Balance and Composure started touring to promote the album and are set to begin a 28-date U.S. tour this week. The Doylestown, Pa.-based, five-man band will begin their tour on April 20 in Amityville, N.Y. and follow it with an April 21 stop here in Rhode Island at The Met in Pawtucket before beginning their trek south.

The quintet of Jon Simmons, Erik Petersen, Andy Slaymaker, Matt Warner and Bailey Van Ellis make up Balance and Composure. Van Ellis said the members of the band met in the town of the high school where two of the members live. Though their roles vary in the band, Van Ellis said they all have input on the music they create.

“I write a good amount of the music we record,” Van Ellis said. “[Input is] pretty open ended. Whatever I feel like writing or whatever anyone else feels like writing–whether it’s a guitar riff or a drum beat or a whole song–everyone has the ability to [input] that.”

Amassing more than 50,000 followers on Spotify and Twitter, respectively, and 100,000 likes on Facebook, Balance and Composure have a large fanbase, which gives them a leg up when promoting and releasing music. On Oct. 3, 2013, shortly after their second release, The Things We Think We’re Missing, the band was involved in an accident that totaled their van and trailer.

The accident prevented them from being able to travel to Canada, but they were back on the road a week later, according to Entertainment Weekly. While on the road again, “a deer collided with their van about 15 minutes away from where they crashed in Painesville, [Ohio].” Fast forward to October 2016 and the band officially released Light We Made. The album takes an approach to

music that deviates a little from the sound the band had in previous projects, but remains sonically Balance and Composure. The album, which after all the music was written and composed, took “about a month and a half [to] two months” to record, according to Van Ellis.

“It’s definitely a departure from our last few albums,” Van Ellis said. “I think for the most part it’s gone over really well. The people who listen to our band found it kind of refreshing in a sense. It’s still the five of us playing together and putting out a record. It’s just a different take on something that we’ve been doing for a long time.”

The album has charted on Billboard in multiple categories. On the Billboard 200 its reached rank 137, but on the Alternative Albums, Independent Albums, Top Rock Albums and Tastemaker Albums charts it has reached no lower than rank 24. Though they love creating music, being on tour doesn’t always allow for it. Due to the nature of touring, Van Ellis said creating music on the road isn’t possible due to time restrictions.

When they do find time, however, Van Ellis said the band likes to sightsee whenever they have a chance.

“There’s definitely spots in every city that we’ve been to enough that we kind of know where we like to eat…just spots we like to frequent,” he said. “Traveling and music go hand in hand…it’s good to be a fan of not only playing music, but being able to travel.”

Here are the dates Balance and Composure will be on the road, check and see if they are heading to a city near you: 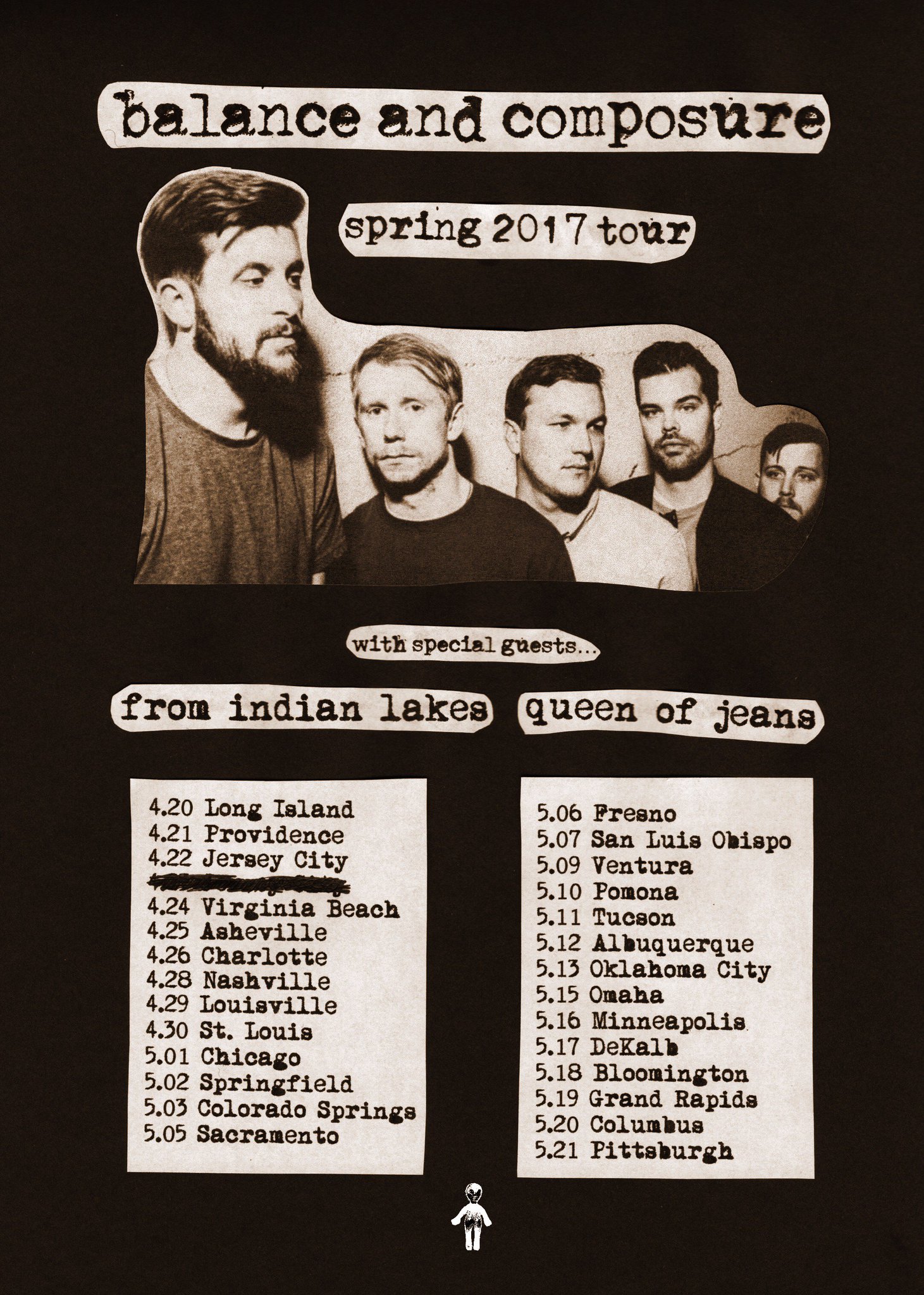 Like Loading...
Tags:B&CBailey Van EllisBalance and ComposureInterviewLight We MadeLocalThe Things We Think We're Missing
Share on FacebookShare on TwitterShare on LinkedInShare on RedditShare on Email
Hensley CarrascoApril 18, 2017

Danny Schiller fuses Spanish and American cultures in his music

John Mayer Releases Long-Awaited ‘The Search for Everything – Wave One’